LDF: The Battle for Arcanon Major

What if the only love you ever wanted was with the only man you couldn’t have? 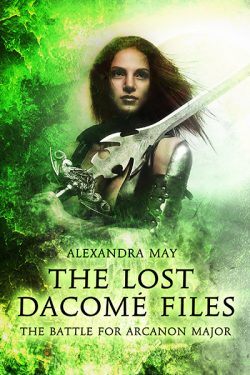 With only a small army at her command Halíka Dacomé, a skilled warrior and daughter of the Elemental King, is ready to lead one final battle to save her people and her planet. A battle against the savage, bloodthirsty Primords who want to extinguish the diminished race of Elementals once and for all.

But before battle commences her father is given an ultimatum from the enemy leader, Arfron Uhnok. If the king agrees, Halíka Dacomé must marry Arfron Uhnok to prevent further bloodshed. If the king disagrees they, as a race, will all perish.

Horrified by her fathers decision Halíka Dacomé leads her army onward regardless of the consequences. Because her heart belongs to another. A love that blossomed many years ago. A love that her father has forbidden.

“When you’re out there on the battlefield with your captains and your soldiers, when you fight, you are the strongest, toughest, fiercest woman I know. Sometimes you scare me at how hardened you are.”
“But that’s just—”
“No, I know what you’re going to say. I know it’s who you really are and I love that person. She’s someone I admire so much.”
“What are you trying to say?”
“I’m saying that I feel honoured that I get to see the real you. When you’re with me, you turn into this soft, beautiful, lighthearted woman whom I adore. That woman who stirs something inside me to a point that I can’t bear to be without her. I never see that woman with anyone else. Not Cary, not her brother, no one. Halíka, I think I know how you feel about me but—”
He looked down at our hands, somewhat crestfallen.
“But what?”
“You never say it, Hal. I’ve never, ever heard you say the word. Not even with those closest to you.”
“What word?”
“Love,” he sighed and rested his hand on my cheek, cupping my face. “The word is love. Is Halíka Dacomé capable of such a thing?”
– Nerído Xipíle to Halíka Dacomé

Reviews for The Battle for Arcanon Major

Well, if I had to sum up this book in only one word it would be MINDBLOWING!
I think this book sheds some light on the mystery that entrances you in the first. I actually think I’m going to re-read “Elemental: The First” with this new found understanding of Halíka Dacomé and the three other elementals.
In the start of the book we find Halíka Dacomé on the brink of a battle against the Primords. We follow her from there through ups and through downs while she’s trying to save herself, her family, her friends, and most importantly, her people. In the end (trying not to give away too much here) the whole story of how the Elementals made it to earth made so much more sense.
I think this book was AMAZING and I can’t wait for more!
Reilly – Goodreads

Well, this was amazing 🙂 I loved the characters and loved knowing the stuff what you briefly got told about in the first book of the elemental series 🙂
Fighting, Love and other stuff happen in this book and I LOVED IT!!
I would so recommend everyone to read this when it is released 🙂
Basically Books blog

WOW!! I am amazed! First, I’m normally not really a sci-fi fan but it’s such a great book and has so many fantasy elements that I LOVED it! It’s just surprising that such a dark story can have so much brightness.
So, Halika, Hally to her brother and friends, is a warrior princess. Her father is a LOSER king. I’m sorry but I have a lot of hate towards the king. I have nothing but LOVE for Hal! She is strong, brave, fierce and wants to do what’s right to help the people of the kingdom. She’s in charge of the army, and she’s earned the right. She just impresses me continuously!
You know I love side characters. There’s not too many supporting characters, but the few they have are awesome! They were written in a way that you feel like they’re your friends too. And Neri- he’s HAWT!! As the boyfriend should be though boyfriend may not be the right word. I’m so enthused about how these kids, yeah kids, save a planet!
The writing is EXCELLENT!! I started reading and didn’t stop! I just devoured it! After reading, I really can’t wait for book two in the elemental series to come out! And it also gives you so much background and understanding! I’m fully invested in this whole series! GIMME GIMME GIMME MORE!! 5 FIERCELY THRILLING PAWS!!
Happy Tails and Tales Blog

Halíka Dacomé is a strong character, who thinks with both her head and her heart-probably her biggest downfall! Alexandra May has developed her characters so well that you feel all of the emotions, see the scenes, feel the power of the moment! This is a MUST read for anyone who has already or will be reading ELEMENTAL: THE FIRST! Well done! I was glued to the pages, white-knuckling it all the way!
Tome Tender Blogspot